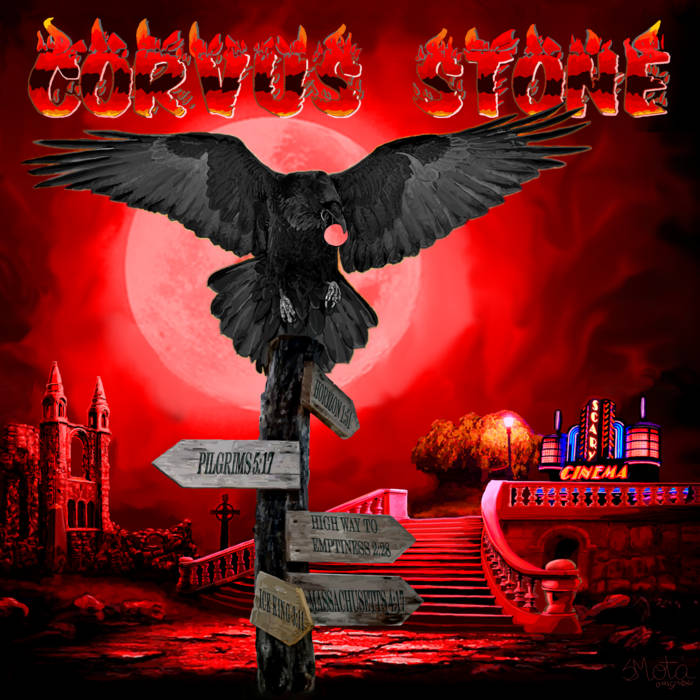 Scott Schleifer Wow, this album is a sonic journey, just flowing through almost 80 minutes of exploring. My advice is headphones, decent volume, and let the musicians take your thoughts for a pleasant ride, exploring canyons and valleys with Pasi's keyboard arpeggios and Colin's guitar work, but grounded by the awesome bass and drums (and occasional vocals), until you return to where you started, changed for the better from this journey

Who are Corvus Stone?

We are all lovers of a huge variety of music. Pasi asked Colin to play guitar on Iron Pillows in late 2011. He did. Petri heard the result and asked if he could play bass on it. We KNEW what we had from that one small thing that we did. In 2012, Pasi sent Colin Ice King. That was the real start of the collaboration and album plans. After we had completed about 6 tracks, I think we were all stunned by what we were doing. The results were fun, moving, foot tapping and powerful. It sounded like we have been playing together for 10 years.
Pasi, composer and keyboard player, with the most original and far-ranging musical ideas I have ever encountered, has composed everything on here except Cinema. That was Petri's. Petri is a multi-instrumentalist and composer. He also happens to be a virtuoso on bass.

Colin takes the job of arranging the music. We all play crucial roles in Corvus Stone. We also all play exactly what we want. No direction or restriction is ever placed on anything. The result(surprisingly) is total cohesion in every piece of music. It is all about the music and combination of the sounds we chose. It is never about solos. It isn't typical prog, jazz fusion, funky 70s TV music or Rock. It is all of those and more.

Late in the recording process, Colin met Blake Carpenter and started playing guitar on the Road to Avalon project. Blake loved Corvus Stone. One day he asked if he could write lyrics and sing on a couple of our pieces. The first he chose was Ice King. Brilliant. Few would have the imagination to sing on what we have recorded. Blake does and he will hopefully be working as a Stone a lot more now.

There is one track on here called Jussipussi, written by Stef Flaming of Murky Red, reworked by Corvus Stone and could be our considered slightly Zappa. Stef's voice can be heard on it and he also plays guitar.
A bonus track called "You're so wrong", is a cover version of a Black Widow song. We are proud to have an original Black Widow guitarist (John Culley) playing guitars on it! On drums is Victor Tassone of Unified Past. Blake is on vocals.
Colin is also a member of BunChakeze, Colin Tench Project, Oceans 5 and The Minstrel's Ghost(with Blake Carpenter and Zoltan Csörsz Jr).
Lemmy is an ex-member of Lyijykomppania and a current member of Saturn Twilight and Progeland (he's also included in various other projects).
Pasi has had his Psychedelic Eye music project and for some years has been the archivist for Black Widow and has been a great encouragement and help to them. They recently released their first new album in 40 years!
Our new drummer Robert Wolff, joined us recently and he was previously in RAVEN and MICAH. He is also a virtuoso with a fabulous feel for music. He is now a permanent member.

Blake Carpenter. The Minstrel's Ghost and The Road To Avalon ( www.minstrelsmusic.com ), has become our very special guest on vocals. He will also be a regular guest or even member of Corvus Stone.
Apart from Colin, nobody was asked if they would like to join this band. Everyone wanted in. A very special and talented fan and friend of Corvus Stone has been crucial to the success that has already started for us...
Sonia Mota has done all the artwork and has acted as a band member. Everything she does is well thought out and cleverly connected to the music. The quality of the art and the imagination she has is quite astonishing. Sonia was also not asked to do it. She just joined us. In the true Corvus Stone tradition.

What started as a side project for Pasi, Colin and Petri have become the collaboration of our dreams. This album is no longer due to one fact. CDs only fit 80 minutes on them. We already have 4 tracks started for the second album and Robert is now fully in Corvus Stone and recording right now.
Anyone who likes music should give this a couple of listens and we guarantee will hugely enjoy some or all of it!

I love music. I hate music by numbers. If there is one album I consider to be a template of how to do things, The Beatles White album would be it.

Bandcamp Daily  your guide to the world of Bandcamp